Rione Terra was the first inhabited nucleus of the city of Pozzuoli. The citadel is built on a 33 meters high tufa promontory, surrounded on three sides by the sea. Rione Terra has been a place of several historical and natural events which brought important changes in the morphology of the Phlegraean Fields. Nevertheless, it remained inhabited, preserving memory of the past centuries. The first settlement was probably established by a group of exiles coming from the Greek island of Samo, escaping from the tyranny of Policrate. These founded the town of “Dicearchia”,(right government), around 530 BC. However, the archaeological excavations did not reveal substantial remnants of this Greek town. It was after becoming a Roman colony, in 194 BC, that Pozzuoli and the citadel lived their “golden age”, a period of greater splendor. Puteoli remained the main port of Rome for centuries, until the creation of the port of Ostia and, in any case, until the end of the Western Roman Empire in 476 AD. 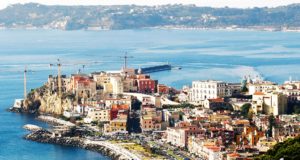 The living nucleus was rebuilt after the eruption of Monte Nuovo, which took place in 1538, by the will of Pedro Álvarez de Toledo, viceroy of Naples, who decided to offer tax incentives to nobility and clergy members if they chose to build their own palaces on the Acropolis of Rione Terra. Thus, the Roman city became a sort of unified platform on which the 16th Century buildings were erected. These buildings are currently undergoing restoration and they were inhabited until March 2nd 1970, when the population was forced to evacuate the Rione Terra due to the intensification of the phenomenon of “bradyseism”, (a slow upward and downward movement of the Earth’s crust).